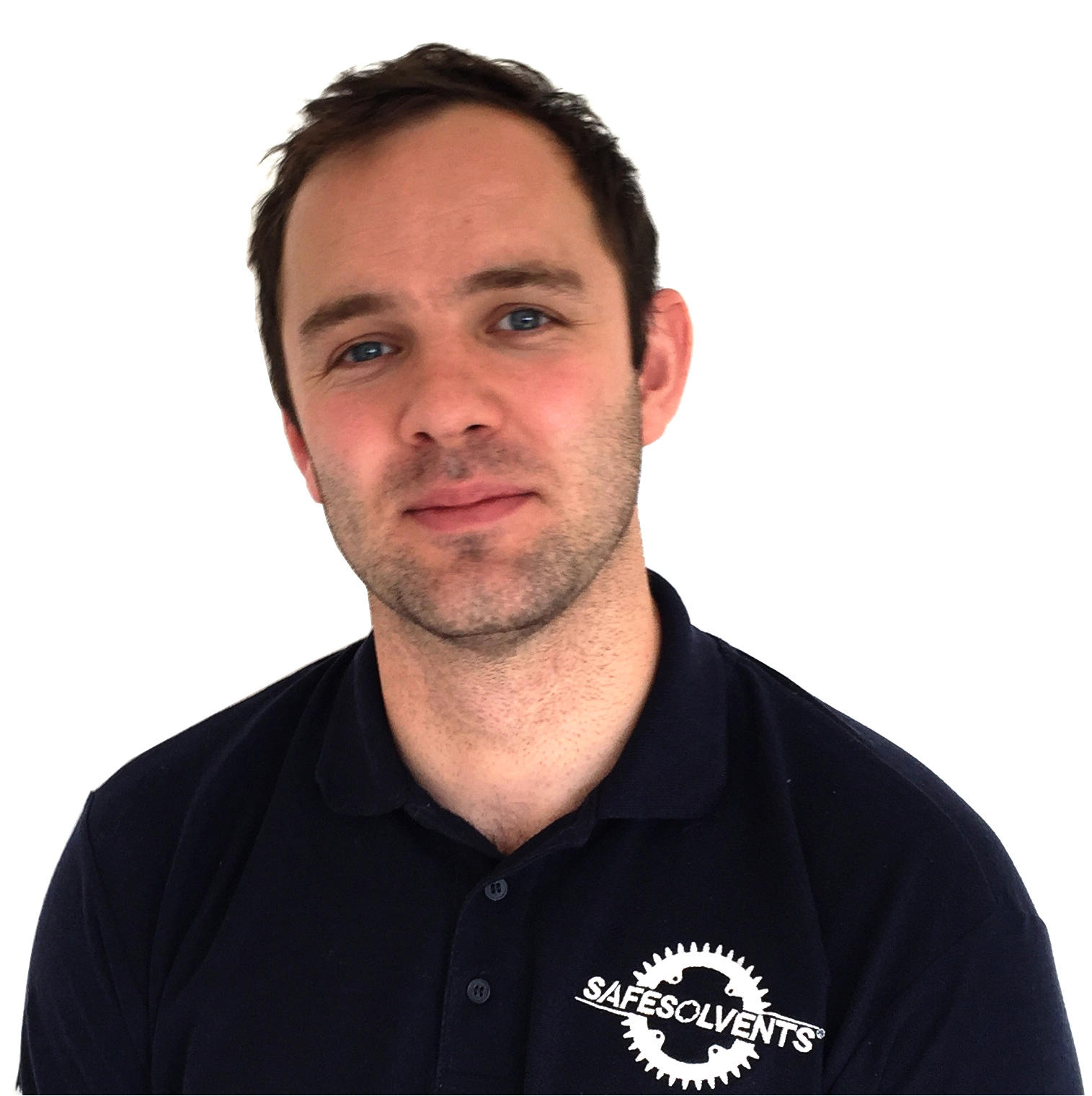 In 2013, entrepreneur Tom Sands developed a unique and highly competitive industrial parts cleaning fluid, designed to replace condemned trichlorethane and other hydrocarbon solvents. He launched a new company to market and sell it, Safe Solvents (SSEL). He also designed a machine to commercially exploit the invention and help raise process productivity and throughput on the shopfloor.

Manufacture is outsourced within the UK to a full-service contractor, ICEE Managed Services. The company provides a complete design for manufacture, prototyping and volume production resource, but has proved to be more than simply a passive contractor. SSEL regards it as a highly valued innovation and technical production partner, actively collaborating and contributing to product and process improvements.

Where it all starts

A parts cleaning facility may seem mundane, but try running an engineering or manufacturing business without one. Whether a small autosport workshop or a major global manufacturer, operators must have somewhere to thoroughly clean parts ready for the next process, whether assembling an engine, or preparing to apply a protective surface coating.

Use of traditional cleaning methods based on hydrocarbon solvents and heated detergents are increasingly unacceptable. To protect the environment and reduce harmful global warming, both these options are being condemned, with growing restrictions placed on use.

In classic disruptive technology terms, Sands devised a better solution. He comes from a third-generation line of entrepreneurs involved in development and commercial application of speciality chemicals. He graduated from the University of Leeds with a degree in product design, an education centred on design innovation and manufacturing, including a keen awareness of marketing. His passion has always been mechanical engineering, manifested by actively competing in motor racing. Regularly stripping, cleaning and rebuilding big and small mechanical items for his race car (a 1969 BMW 2002ti) gave him a keen practical sense of cleaning parts and assembly imperatives.

Leaving Leeds, he became a partner in a small but highly successful new product development consultancy, specialising in devising and bringing to market chemical-based cleaning products, from concept through to production and launch. Clients included big automotive manufacturers and well known retailers of all types of household products. 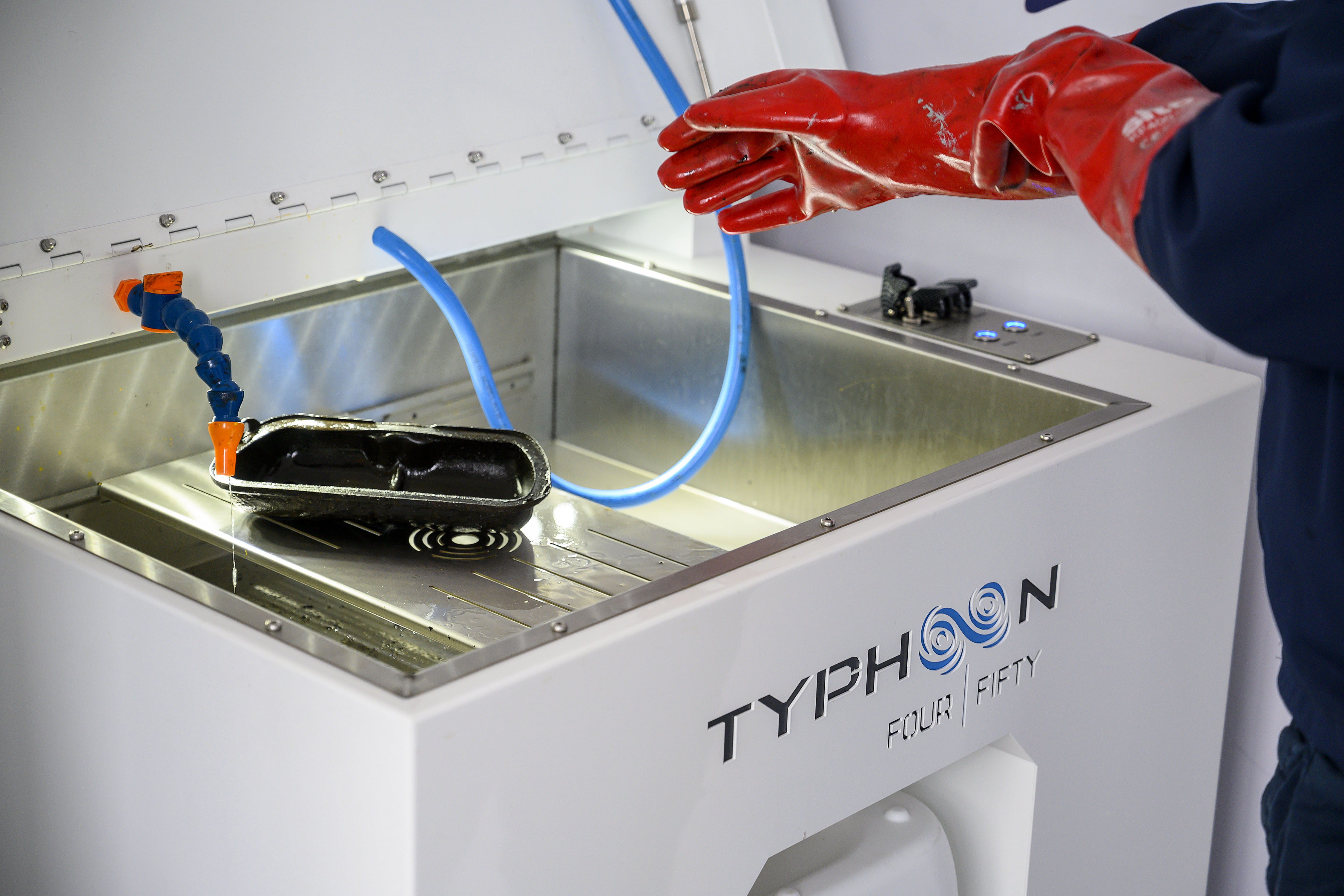 Part of a range of high performance cleaning machines, the Safe Solvents Typhoon 450, made for the company by manufacturing contractor ICEE, is available in three options and replaces traditional sink-on-drum, manual cleaning machines

In 2013 he left to pursue his own interests, in particular a ground-breaking product he conceived, supported by a new company he founded, SSEL. Designed to replace traditional and harmful processes, his APWF product range is an advanced water-based, non-toxic, non-flammable, non-carcinogenic cleaning system. Designed to deliver maximum efficiency at ambient temperatures and with a volatile organic compounds (VOC) level of just 6.5%, the fluid requires no heating, fume extraction or ventilation

Without any negative side effects and providing the same level of performance as traditional high contact solvents, it can be used for manual and cavitation cleaning. Development work on the new product led to SSEL applying for a patent on a unique, break-through process it calls Ambimization® – the active splitting or separating of all waste particulates and oils. The result, claim SSEL, is longer effective fluid life and reduced waste.

The business base was a small and draughty barn in Berkshire where he brought together a group of colleagues. Although the new cleaning product could be used in existing cleaning machines designed for competitors’ products, it soon became clear only best results would be obtained in those designed exclusively to exploit the novel advantages of APWF.

Sands and his team designed and developed prototypes of a range they call Typhoon, comprising three versions. Designed for ease of use and to raise productivity, the machines’ performance combined with SSEL’s APWF began to set a new standard in the market. A Midlands-based SME manufacturer was first contracted to make parts and fabrications, assembled by SSEL in the barn near Maidenhead.

Launching the range at the 2015 Autosport International motor racing show in Birmingham’s NEC, the first visitors to step onto the stand were engineers from a leading F1 motor racing team, soon to become SSEL’s first customer. A great start to the fledgling business.

As sales quickly grew, it became obvious the barn was no place to continue assembling and testing SSEL’s machines. Suitable premises at the right price were offered to the company by the Royal Borough of Windsor and Maidenhead. Sands and his colleagues moved in, turning a small, ex-clothes-making factory into a gleaming centre for assembly, test and centralised administration.

Around the same time, it looked clear rising market demand and higher levels of quality control and testing requirements would soon outstrip current resources. First-generation Typhoon machines plus new additions to the range required review to meet the stringent quality assurance demanded by motor racing and increasingly, automotive manufacturers and other large customers, where on-time delivery and faultless performance is paramount. 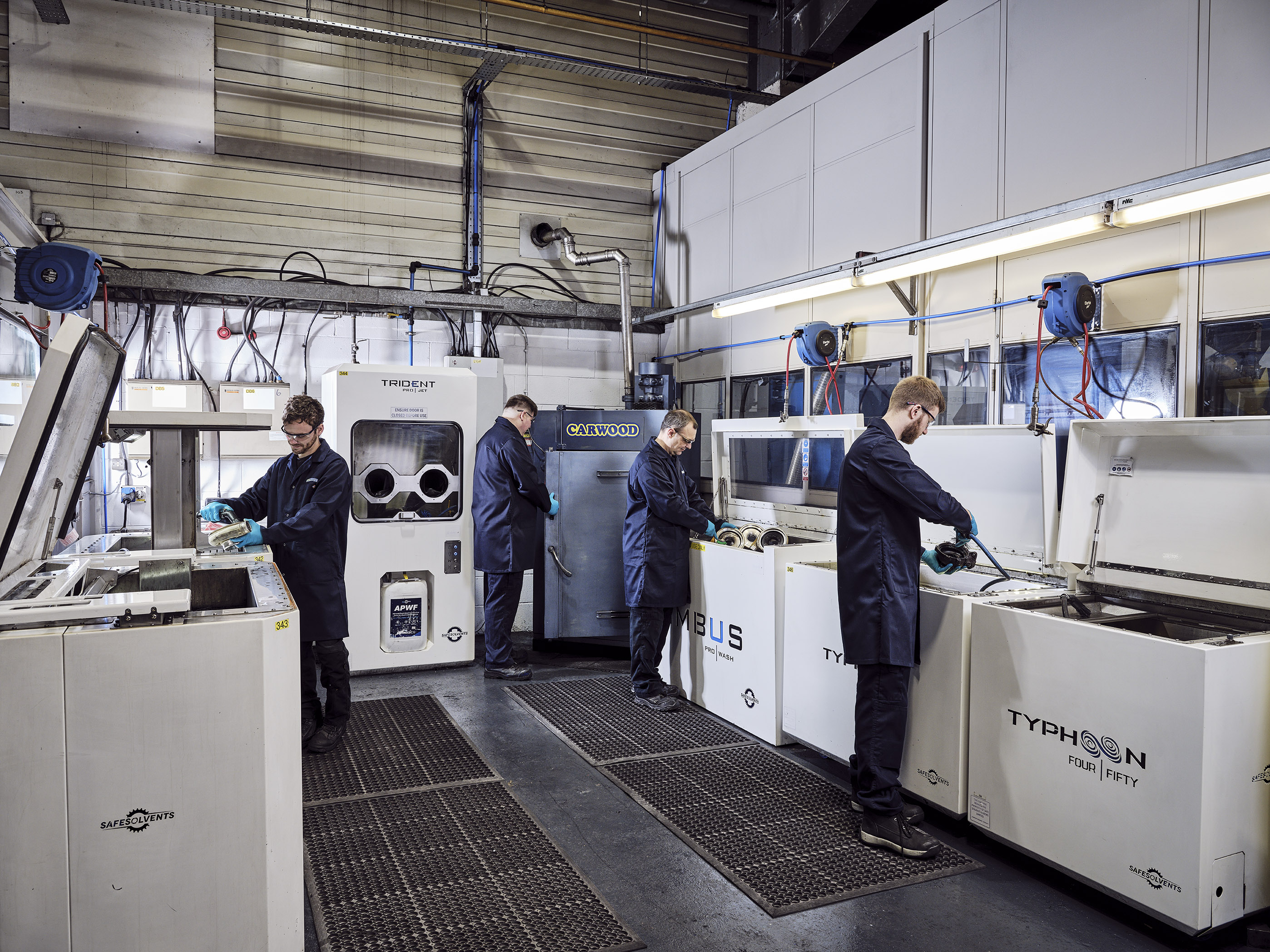 Safe Solvents cleaning system in use at Carwood Motor Units, a remanufacturer of diesel fuel injection, electrical, and turbocharger systems for all types of vehicles

Twelve months ago, Sands brought in Aspremont, a venture builder which helps founders of disruptive companies with unique intellectual property (IP) achieve their full potential. Aspremont seconded Ben Reid, who has a track record in creating and executing successful go-to-market strategies for early-stage companies, to work with the SSEL team.

Reid explains: “We take a business from start-up to scale-up. So when it’s a start-up, everything revolves around the founder. Working with the first contractor was absolutely fine when Tom could be involved in everything. He knew how it was designed, built and what parts went into it. He could resolve any issues that arose. When Tom and I discussed moving to a scaling strategy, it was very obvious that – to support big expansion ambitions and higher volumes – going forward we had to look at new resources.”

Focusing primarily on the creation and commercialisation of IP, SSEL had no interest in becoming a manufacturer and started looking around for a new contractor. ICEE Managed Services met requirements because it had years of experience designing, making, fitting out, installing and maintaining its own core product range – robust and high quality, electrical enclosures made from sheet metal, plus other bespoke structures.

It knew how to reliably assemble electrical and mechanical devices, fit and connect cables and test integrated systems. As Reid says: “The work ICEE were doing with companies in the telecoms sector is not a million miles away from metal boxes that have pumps in them and clean parts.”

Moreover, it possessed ample evidence of accreditations and quality control procedures, all complemented by rigorous project management and modern, lean-based manufacturing scheduling, monitoring and control systems. This is vital to SSEL as working with Formula 1 and tier one automotive manufacturers means, whether the order is one machine or many, it cannot risk missing a delivery deadline. 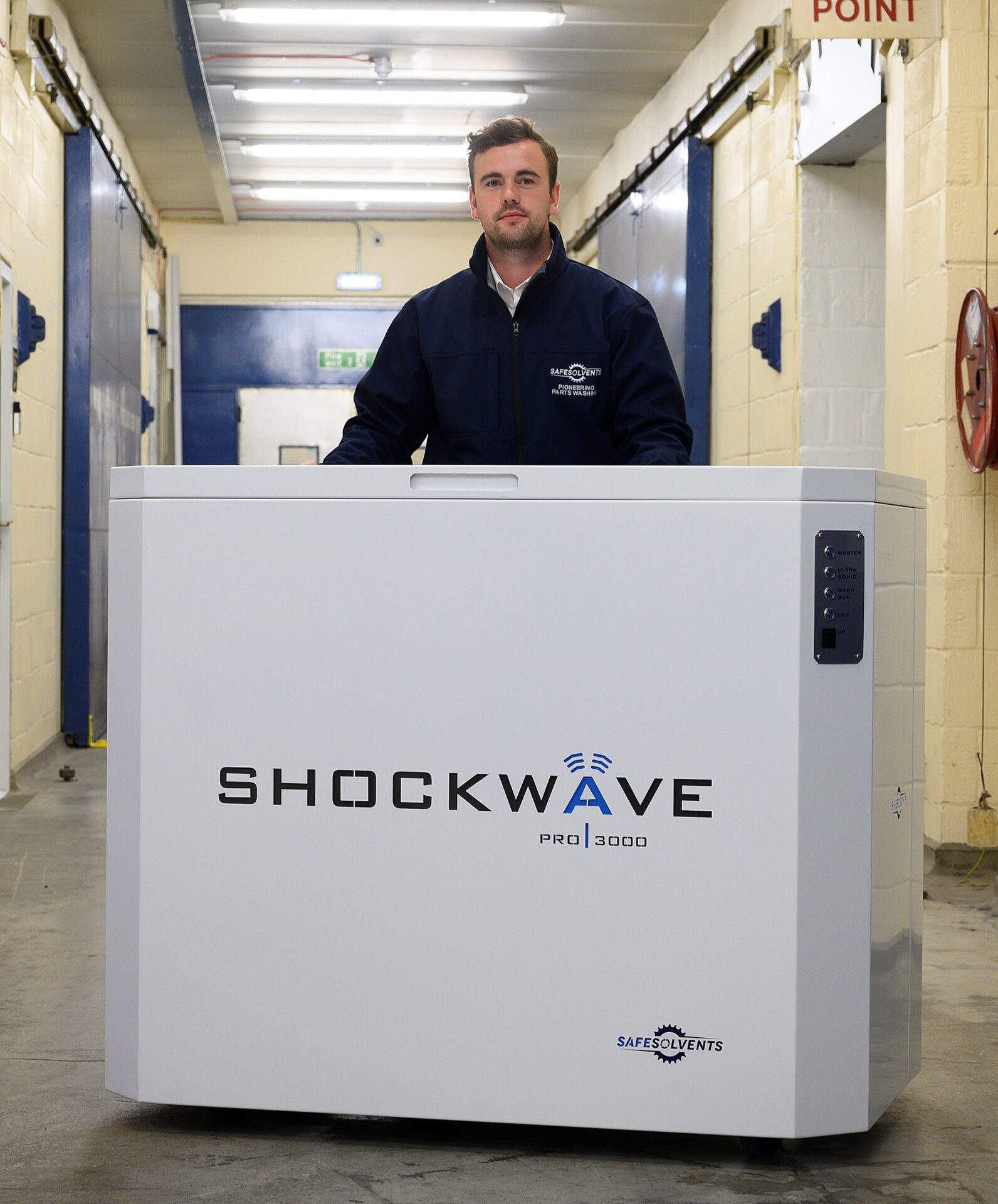 ICEE began working with SSEL in January, 2019. First, existing drawings had to be converted into the Solidworks standard the contractor uses. Next, SSEL took the opportunity of getting the contractor to review and help improve product designs, in effect produce a second generation of machines, embodying all the feedback and field experience SSEL had gained over several years. ICEE value-engineered one model at a time, refining design for manufacture and making changes aimed at perfecting quality and reliability.

Sands explains: “The rigorous nature of doing that forced us to look hard at the design, components and functionality. ICEE were incredibly helpful. I hadn’t really thought of them as a specific prototype shop, but there’s no doubt they have an inherent skill set [in that area], allowing the process we were doing to be incredibly iterative and productive.

“They fed their ideas and experience into the process, not just from a theoretical but also a practical, shopfloor perspective. They have been integral at finessing the final versions of each of those machines. I suppose we hadn’t really thought of them as being a technical partner, but that’s what they are really.”

He cites an example, a backplate on an ultrasonic SSEL machine. This features actuators, which lift up a workpiece support platform locked inside the cleaning fluid tank. Because of the way it’s designed and the weight it carries, when the actuators lifted the platform, there was a degree of juddering, it wasn’t quite smooth enough.

ICEE did two things. First, in the sleeve where the actuator slides, a ball-bearing system was designed that allows it to run more smoothly. Second, he says, they replaced a flat steel plate located at the back of the machine with one made from aluminium, which reduces the weight that has to be lifted and therefore eliminates juddering.

“I thought that was really innovative, because it was very end-user focussed. There was nothing wrong with the juddering, it wasn’t dangerous, it performed right, it just wasn’t a great customer experience, but now it’s far better,” he says.

Reid adds: “Other key benefits include reduction of production time, from eight weeks to a target of four weeks, so that’s quite significant. That’s because we are not assembling, yet thanks to the level of transparency offered [by ICEE] there’s much more timely sight of their production and delivery progress.”

Sands concludes: “From my side, the coalface on design and innovation, I’m seeing ICEE as an innovation partner, so when we go in there and I say this is what I want to achieve, this is what we’ve got so far, they have helped us get to a perfect product quicker than before. There is no doubt about that. They are as much an innovation partner as simply a manufacturing and assembly company.”